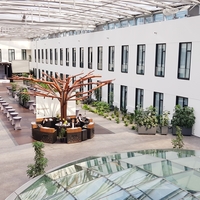 Berlin-Tegel Airport is eight kilometres northwest of Berlin's city centre and when Germany was separated, it only served West Berlin. Over 20 million people use the airport annually, and it features flights throughout Europe and to some international destinations, as well.

A brief history of Berlin-Tegel Airport

The area that is now Berlin-Tegel Airport has been used for aviation purposes since the early 1900s. In both the First and Second World Wars, military training and research were conducted there, but it wasn't until the late 1950s that the airport commenced commercial operations. A brand-new terminal was constructed in the 1960s and opened in 1974. As the terminal was being built, the runways were lengthened and new roads were built linking the airport to the city.

Getting to know Berlin-Tegel Airport

Officially, Berlin-Tegel Airport has five terminals, although they are quite small and share the same building. The main building is home to Terminal A, which has the main concourse and is where most major airlines depart from, and Terminal B, which is a former waiting area that has been converted into a departure gate. Terminal C can handle large aircraft and lots of traffic, while Terminal D was once reserved for parking at Berlin-Tegel Airport, but has since been converted into a small concourse. The arrivals area in Terminal D is called Terminal E.

OnePark is the only way to go if you're looking for cheap parking at Berlin-Tegel Airport because they have access to a variety of parking options throughout the area. Simple use the OnePark website to book your Berlin-Tegel Airport parking ahead of time, and you won't have to worry about tracking down a spot arriving at your terminal.